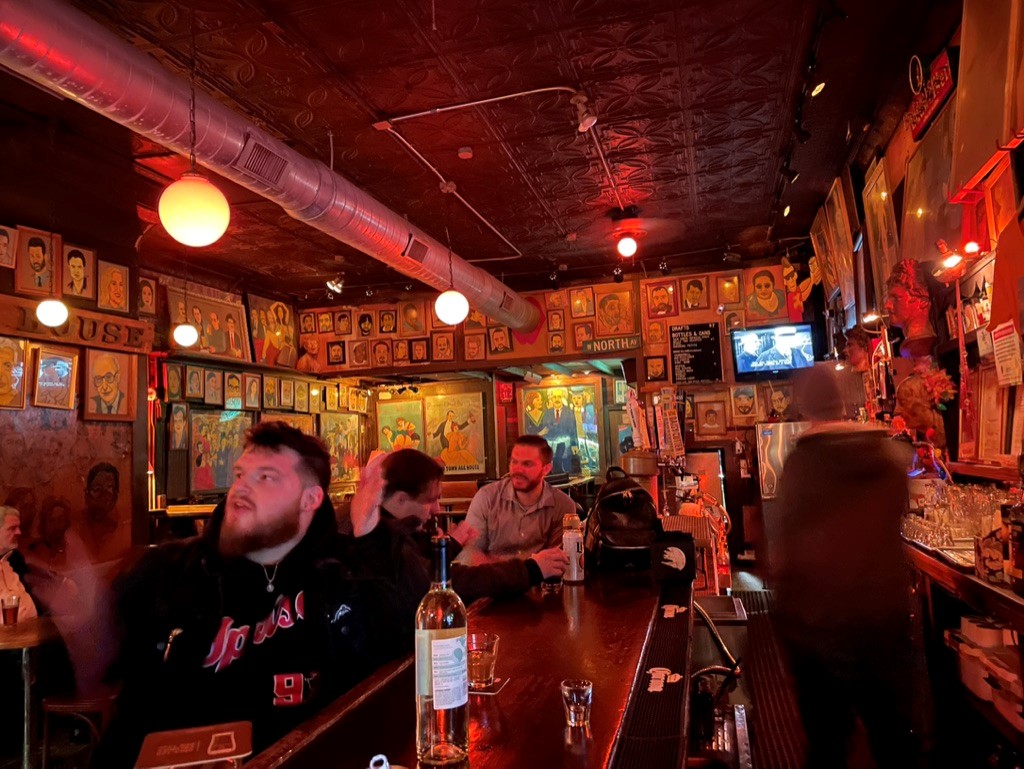 It is impossible not to be impressed by Chicago. That skyline flirting with the edge of Lake Michigan never gets old. The unmistakable rattle of the L weaving through skyscrapers, like the blood flowing through the veins of this truly great, tough metropolis. Chicago doesn’t apologize for what it is. Chicago doesn’t have to. While some only listen to the negatives on the news, those who know better hold their heads high in the windy city and enjoy a mecca full of music, humor, and good times.

https://www.smythandtheloyalist.com
Smith & The Loyalist is a dual concept restaurant with a Michelin star chef running both kitchens. My time was spent at The Loyalist, which is their basement speakeasy wonder bar. The Chicago Tribune named the burger at The Loyalist, the best burger in the city and I can’t disagree with that accolade. Bone marrow in between a bun is how I would describe the taste. Who doesn’t love that? That’s not all. Bring on flaky cubes of potatoes au gratin and what I would describe as a foie gras cream puff. Pair everything with an incredible wine list. Follow it up with pours of Buffalo Trace and then white truffle house infused Green Chartreuse. It really is that good at The Loyalist.

http://www.delilahschicago.com
Deep down, I am a punk. There I am, my chucks are worn, my hair is greasy, the Stooges and The Clash are pleasantly destroying my ear drums, as I bop down the street. Well not so much anymore, but perhaps again one day when I have that inevitable identity crisis. When that does happen, I’ll be found curled up on a bar stool at Delilah’s, with a smile from ear to ear. It’s straight punk down to its foundation.

There are also over nine hundred whiskies at Delilah’s. That’s not a typo. NINE HUNDRED. I nearly lost my mind. After one of the greatest menu struggles, I’ve ever had, I went with an Islay single malt that I’m not going to share the name of with you. Selfishly, I want to be the one that kills that beautiful bottle. Behind the bar, tucked in a corner, vinyl is being spun seven nights a week. The Cramps were seeping through the speakers when I raised that glass to my lips for that first sip of scotch.

Delilah’s isn’t done. They have a second floor with a pool table ready for you or me to lose money on with some of the locals. Listen. When I die, ask the crew there if I can be buried underneath the bar. If the zombie apocalypse ever does happen and I come back as a crusty undead ghoul, I want to start my rampage at Delilah’s with some fast angry tunes and a whiskey to gulp down.

http://goldenapplediner.com/menu/
Ok there isn’t anything amazing about The Golden Apple Diner, other than the fact that is open 24hrs a day, 7 days a week. The Golden Apple is for the working folks and the inebriated folks in need of that greasy spoon diner chow we all crave. You have all been to this dinner before. There is one in your hometown that has helped lessen what would have been a biblical hangover the next morning.
There are no pics. I hide my shame in this case. It is possible to both love and hate something at the very same time, and the Golden Apple is both that blessing and that curse.

http://www.theoldtownalehouse.com
A beloved favorite of both the late Anthony Bourdain and the late great Chicagoan Roger Ebert, the Old Town Ale House has been running since 1958. The walls are adorned with the paintings of owner Bruce Elliot, who also authors a blog centered around the regulars, the bar, and his often-curmudgeonly opinions. The bartender holding it down when I came meandering in had a Banquet beer in hand, I couldn’t help myself but to order the same. Sometimes a bar just inspires conversation. There is no scientific explanation why the grounds of the Old Town Ale House get you exchanging playful barbs with complete strangers, but you find yourself doing it organically. I know I’ve found a dive worth frequenting when I get cussed out and told I’m liked in the same sentence. “You’re an a**hole, I like you!”. So are you Old Town Ale House, and I like you too.