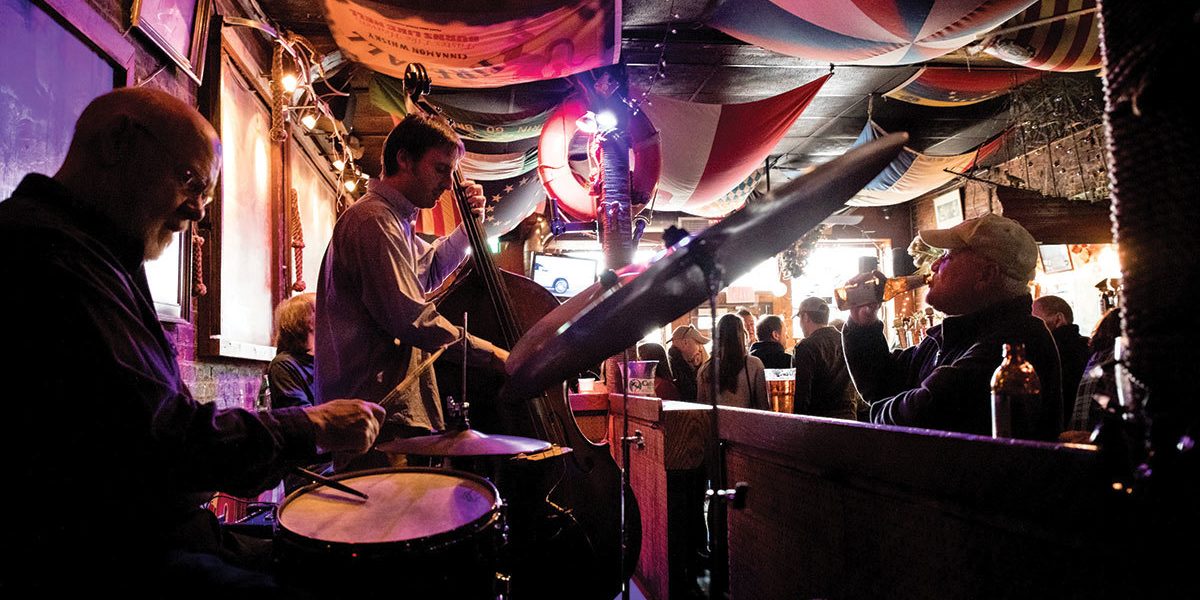 The city itself is beautiful. The older I get the more I start to enjoy the mid-sized little old cities of the US. Walking around by the water in the wee hours of a chilly morning, I started to already look forward to my next visit.

Dive Bars will save us all…well, maybe not but I would like to believe that. There is no place more honest than a dive bar, no place more accepting. Cat’s Eye is my kind of dive. Good drinks that don’t cost you your first born and great live music that keeps a steady flow of fun-loving miscreants in and out. I found myself there on a Thursday enjoying the Cadillac Jump Blues Band and sipping on a Sierra Nevada pale ale. It’s always nice to see folks from several generations mixing it up and dancing together. Boomers to Z were cutting it up both poorly and wildly to the self-described “hardest working blues band in Baltimore” (I almost feel that every blues band talk about being the hardest working and it’s probably a prerequisite for playing the blues).

Fell’s Point is beautiful in general and packed with bars, but this is the one worth putting words to paper for. It’s the complete package. The game was on the single small TV, which I silently was thrilled about seeing that my team, the Patriots, were on for Thursday night football. I kept that quiet since I was firmly tucked behind enemy lines in Ravens territory. The TV being small and secondary is not a knock against the Cat’s Eye, it’s a giant compliment in my book. Keep them small and secondary. On the other side of the bar was the terrifying mascot, a cat bust nearly the size of my ten-year-old hangs on the wall in the same fashion as a mounted deer trophy. This feline was decked out like a pirate with a grizzled beard and a toothy smile that would have given a younger, more inebriated version of myself, nightmares. It’s amazing and perhaps worthy of a tattoo if I was more of a pirate, cat person, or Baltimorean.

Wrap this up by meeting a few crusty regulars and we have a complete night. One such person of note…let’s just call him Mike, couch surfs around multiple recording studios and moved to Baltimore from Philly on a whim when the Ravens won the Super Bowl some years back. He proved to be a truly interesting and funny drinking companion, and I don’t know if you can ask for anything more than that from someone. So, after tipping back a shot of Jameson for my ficticious Baltimorean Irish brother Jimmy McNulty, I spent the night there having an incredible time before walking back to my hotel in the nippy slightly salty air of Fell’s Point.

Now let’s talk about D.C. I had about a full day and night in our nation’s capital but, before I get to where I meandered about, let’s discuss something briefly. D.C. has its own beautiful identity that seems to get lost due to whatever direction folks not born there seem to be leaning. Walking about drinking and eating, I couldn’t help but wonder what the city would be like if it got a break from being the center of the country’s political, often obnoxious, tug of war. Perhaps government should take the show on the road for a few years and give the citizens of a city overshadowed by its own past and too closely associated with two arguing massive parties, some time to breathe. Just an interesting thought and about as political as I will ever intentionally get here. If you are still reading, I’ll get off the tiny soap box and start talking drinks and food again. I hunkered down in Adams Morgan so that’s where you will find most of these spots.

The Line took over an old church of Christ’s’ scientists or scientists that believe in Christ, I’m not sure which one and transformed it into one very cool hotel. My room was excellent and had its own hallway. I’ve lived for years in apartments that didn’t have hallways. Strange thing to get excited about, perhaps but what can I say. There was also a blue tooth speaker clock amongst the amenities and a mini bar stocked with local beer options and a half bottle of Chablis that tempted me the entire duration of my stay. The first floor of The Line is a luxurious and very open dining room sandwiched between two bars. I will get to that part a little later. If traveling to D.C. stay at The Line. That’s where I’ll be for every future visit.

Simple, big, and delicious empanadas out of a small shop on 18th St. $6 gets you a handheld meal which is a solid choice when you are just walking around 18th Street checking out all the restaurants and bars. Chorizo, black beans, cheese, and cilantro encased in a browned crust is as soul satisfying as it gets.

Coffee and espresso, while not as vital to our existence as water, may just be more important to the caffeinated majority of us than H20. My belief of any business that specializes in one thing above all else, is that if they don’t knock the simplest iteration of it out of the park then nothing else is worth trying. Bring me to a burger place that puts truffle shavings and foie gras on their burgers but makes a mediocre plain old cheeseburger with nothing on it and they’ve lost me. Cocktail bars that parade out an overgrown brass pineapple tiki drink on top of dry ice but can’t nail just a Manhattan are everywhere. I live in dread of waking up to a world where every coffee shop has been replaced by the orange and purple colored, liquid candy bar drive-throughs that masquerade as coffee shops. Order a black & white chocolate double quad almond milk foamy latte with gleeful anticipation, but try to get a double shot of espresso and watch the look from the barista to let you know if it’s battery acid or good bean juice. Tryst is quite large and more than just a café or coffee shop. They have an impressive list of solid beer and the food on people’s plates looked tasty. I ordered just a double shot. Nothing else could be ordered to gauge if Tryst cared about what they were doing. It was lovely espresso that had crema and depth and chocolatey dark undertones. If I find myself seated there again, I’ll order a little bit of everything with rock solid confidence that everything will be great because Tryst nailed the simplest thing that so many other coffee hangouts overlook or just don’t care about.

Homage must be paid here on the holy ground of U street. For over sixty years Ben’s Chili bowl has been feeding the good people of DC. Every time I find myself in Washington, I am going to devour a chili half smoke loaded with cheese and onions coupled with a pink lemonade to wash it down. I have a friend who lives in the area, and he regularly puts down two of these bountiful sausages along with some chili fries to boot. To go to D.C. and not visit Ben’s is blasphemous. As far as I am concerned, Ben’s Chili Bowl is more important to stop at than the Washington Monument.

You may recall that I said I would get to the hotel dining room and bar a little later. No Goodbyes is the restaurant within the Line Hotel and it’s outstanding. I sat at one of the bookend bars and enjoyed some mezcal cocktails and shots of amaro with a few industry folks from the neighboring speakeasies. For dinner I ordered a beef carpaccio dish, followed by “An Assortment of Beets”, which was by far the best beet and tomato salad I have ever had. For my third course, crispy pig ear lettuce wraps prepared perfectly with fresh onion and lime. No Goodbyes also does breakfast, which I seriously needed on my way to the airport the next morning. They have a coffee shop style counter set up at the front of the hotel, so I grabbed a sausage egg and cheese that was prepared on ciabatta bread lathered in a delicious homemade hot sauce. Looks like the word is out on No Goodbyes because they recommend reservations even if you are a guest in the hotel. I was lucky enough to find a seat at the bar and I hope to be as lucky in the future.

18th Street is lined with bars and music venues, but not all are kicking on a Tuesday. In fact, most spots are shuttered early in the week. Covid probably is still partially to blame, but then again maybe there just aren’t as many night owls out and about. Luckily it appears that Madam’s Organ has live music for us insomniacs scheduled for every day that ends in Y. The band jamming there while I was enjoying Modelos has a Tuesday residency. Mostly they did covers with their own little spin on the popular old soul and rock & roll tunes. They particularly nailed a Bill Withers song that is near and dear to me. The bar in washed over in red lights and the walls are adorned with taxidermized forest dwellers. Madam’s Organs is a fun time. One of these nights I hope I find myself there later in the week because I imagine those weekend bands get that place jumping.

That’s going to wrap up my time around the Chesapeake. Get on a plane, or better yet hit the road on four wheels with a good playlist and visit both Baltimore and D.C. If I’m not elsewhere I might hitch a ride with you.